App Smashing with Explain Everything

In recent months Mr Andrews Online have been working extensively with the Outwood Teaching School Alliance (@outwoodtsa) We have enjoyed working with Lee Wilson, Director of Primary School Improvement,  as well as a number of Wakefield headteachers including Jackie Savage from Outwood Primary Academy Lofthouse Gate and Paul Fenton from Stanley St Peters Primary School. This work has allowed us to work with teachers from several schools sharing our approach to using technology to support teaching and learning across the curriculum. This has included classroom projects from EYFS to year 6, INSET sessions and keynote presentations at national conferences.

The focus of the work we do is frequently based on speaking and listening, explanations and oral presentations. During our time working with the schools we have met many teachers who are making effective use of technology in their classroom. This guest blog post by Libby Walker (@MissWClass11), teacher at Stanley St Peters Primary School, illustrates the impact of the app “Explain Everything” in science teaching.

With a recent introduction of iPads into our primary school (Stanley St Peters Church of England Primary School), we as a key stage decided to implement the iPads within our current topic- Rivers!

With a view to revamp the science project and inject some of the excitement and interest you often see in other subjects across the curriculum, we decided the iPads would best compliment the science project of ‘The Water Cycle’. The children’s task was to be able to understand, explain and present the process of ‘The Water Cycle’. In previous years this project would have necessitated a Power Point or perhaps a drama production.

The Water Cycle previously involved an introduction session that demonstrated the processes; this was usually demonstrated with a video clip. From this session, the children would have been expected to draw a diagram or begin work on their presentation. Many flaws could be identified in this style of teaching such as: most children in year 5 and 6 are more than competent at creating a PowerPoint and are no longer excited by this method of technology. Very often children copied and pasted large chunks of information to fill their slides and finally when speaking to the children, they said rarely did anyone look at their PowerPoint’s, other than the children’s who were selected in the lesson.

So how could the introduction of the iPad shift the science project to child centred learning, with a sense of purpose?

First of all, we had to investigate ‘What is the Water Cycle?’ using QR codes, which linked to teacher selected (child appropriate) websites all focused on the Water Cycle. We allowed the children a session to view a variety of the websites; we discussed how to take useful notes, which would allow the children to reuse the information from the websites later in their projects. As teachers we placed a huge emphasis on the science being correct.

The Task- The children were asked to produce an animation, which identified and explained each stage of the Water Cycle.

Although as a key stage we had a variety of experience, we selected: Explain Everything and iMovie as the focus apps. Creating my own presentation beforehand proved invaluable as I (@MissWClass11) could highlight any difficulties or mistakes to the children before they began.

As a class we established a checklist of ‘what must be included…’ We allowed the children to take full lead; they decided all 6 processes of the Water Cycle and an introduction page. 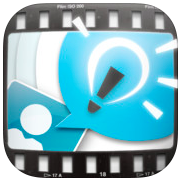 ‘Explain Everything’ was the first app the children used, most children decided to complete the project using two characters (almost a question and answer set up). The children selected their characters from google images. They saved the pictures to ‘camera roll’ which allowed them to import it to ‘Explain Everything’. Within this app, there is a cropping tool, which allows the children to select the specific element of the picture they wish to use.

Most children decided to have one constant character throughout each slide, who asked, ‘where am I now? What part of the cycle am I now in?’ then another character at each different point would respond.

The children saved and imported an image to reflect each stage of the Water Cycle, to keep the project manageable the children completed one process per page. On each page the children inserted a background (and locked it into place). They then inserted the characters on top of the background leaving them unlocked.


Using the internal record button the children used their script to record each process as a slide within Explain Everything, the children found it useful to use their script so that they knew how long to move each character for.

iMovie also allowed the children to insert themed music in the background of their video, insert a title page and credits. All of these tools were discovered by the children whilst they were completing their projects, none of which were on the example.

This is a documentary the children went on to create after the work with the water cycle: https://vimeo.com/86132765

I was astounded and amazed with the quality of the work produced, the level of engagement was amazing and we were asked several times… ‘What is our next project?’
Posted by Unknown at 11:35