Raising Standards in Boys' Writing using the iPad for Gaming

In recent literacy lessons I have been exploring the potential of the iPad to motivate children to write for different purposes. One ongoing target in our school is the emphasis on boys’ writing so the theme here is going to be how one app has been used to encourage boys to write with confidence, in an appropriate style and with a strong level of knowledge. Having collaborated with David on the controllable vehicle project (http://mrandrewsonline.blogspot.co.uk/2012/05/case-study-part-1-how-can-ipad-changed.html) it struck me how confident and knowledgable the children were in terms of speaking about their work, and this clarity and depth had a direct and hugely positive impact on the children’s writing. I wanted to see if using a popular gaming app would be able to make an impact on the writing of the children I teach. 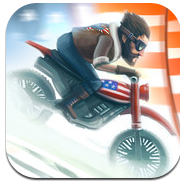 The app I chose to use is Bike Baron by Qwiboo and Mountain Sheep. Players get to test their prowess on a motorbike as the Bike Baron, as they roll, flip, tumble and speed their way through sequences of ramps, loops and levels. This is a very popular game in class. Levels are short and quick to play, there are thrills and spills on the way, graphics and sound are engaging and its really not that hard to complete. A very accessible game!

Use in the Classroom

Over the course of 3 weeks a group of 12 children took part in the Bike Baron Project. The aim was to produce writing for 6 different purposes. The way the lessons worked was that the specific task and writing purpose was introduced alongside an objective for children to complete on the game. Pupils had access to one ipad between 4. (1 iPad per table). Following the introduction the children were given time to take turns on the game, as the other children discussed and noted down key ideas and drew up/completed plans and writing frames. Each piece of writing took 2 days to plan and complete, there was additional game play time and shared discussion/peer review.

The use of the game started every lesson and children were encouraged to take turns to play and discuss what was happening in the game, in relation to the specific writing prompt.

2: Groups take turns to play as they plan and discuss the writing task.

Pupils had to watch each other complete a single difficult jump or ramp in the game (with a high probability of a tumble for the Bike Baron.) After playing/practising and discussing the task for about 10 minutes the pupils then completed their main attempt. The task was to write about it with clear detail from the point of view of the rider ( Bike Baron) in the first person/past tense. The day I jumped the ramp.

b) Report ( To describe how things are).

Pupils were encouraged to play a few of the levels and as they watched one another to discuss the qualities/features of the Bike Baron. His safety equipment, his attitude, his skills ( such as timing and balance), the risks he faces etc. Having looked at a basic outline of a non-chronological report the children produced a diagram/plan as they took turns to play. The writing task was to write a report about The Life of A Motorcycle Daredevil.

c) Instructions ( How to do something).

Pupils were encouraged to play a few of the trickier levels of the game, producing more thrills and spills. Having been shown the key features of instructional writing they were asked to discuss how the Bike Baron could avoid injury when completing a jump/loop. This discussion carried on as pupils took it in turn to play the game. Writing task: How to ride a stunt bike safely/How to avoid injury when leaping ramps.

d) Explanation ( How or why things happen).

Pupils were encouraged to take turns to play a few levels of the game and talk about the controls/key features and technical side of the game. Having looked at examples and success criteria for Explanation writing they plan and take notes as they take turns on the game. Writing Task: How to play Bike Baron.

e) Persuasion ( Why you should think this).

The pupils were given some time at the beginning of the lesson to play a few levels and discuss the task. They had briefly seen an example of persuasive writing and details of the key features and language structure. The theme for discussion is the reasons the Bike Baron would give when encouraging others to take up the sport ( it could quite easily be discouraging). As with the other tasks, gameplay and discussion at the beginning of each session. Writing task: Why you should take up stunt biking.

Pupils begin by playing the game in turn and discussing the prompt having seen an example of a balanced argument leading to a conclusion. Details of the structure of this type of writing have been given along with key language features. This is really a chance for the children to discuss the validity of stuntbiking as a potential Olympic sport. Writing task: Should stuntbiking be part of the Olympics?

A group of children took part in a series of literacy lessons centred around the popular game Bike Baron by Qwibooand Mountain Sheep as outlined in detail athttp://mrandrewsonline.blogspot.co.uk/2012/06/part-1-raising-standards-in-boys.html. The aim was to raise standards in writing. The work is based on the success of the Controllable Vehicle project which demonstrated that the iPad can significantly enhance pupil understanding and interest in a topic leading to accelerated progress in speaking, listening and writing.

All of the children really engaged with the game quickly. The short, moderately challenging levels and simple controls proved popular as did the variety of courses and the high frequency of dramatic crashes. The portability of the iPad, its ability to be passed round a group easily, its large screen for spectator viewing made the gameplay on the iPad perfect for this type of activity.

At the beginning of lessons the pupils were given unhurried time to play the game. They had been provided with a note-taking sheet and a checklist detailing key features of the particular type of writing. Talk was encouraged with an emphasis on collecting language and sharing ideas. It quickly emerged that the children were comfortable watching each other play games and productive talk came quickly and easily. The pupils naturally commentated on each other’s performances, engaged in wordplay and chatty banter about the events in the game. Pupils who had played the game referred to the Bike Baron in the first person as if it really had been them leaping the burning barrels.

Note taking didn’t come naturally at first but as the project developed the pupils began to record good ideas and useful phrases. This happened as other pupils were taking their turn on the game, one eye on the game, note-taking pen scribbling things down from time to time, mouth fully engaged in stunt-bike conversations, mind racing to keep up with the on-screen actions.

Once the allotted time for gameplay had elapsed the iPad had served its purpose and the pupils were ready to write. The quality of written work for all types of writing was very good and reflected improvements in standards for all those involved. One noticeable impact was the pace which children were able to write. Some children who in recent tasks had struggled to get their ideas down and structure sentences managed to complete a full A4 page of accurately punctuated coherent written content in an unexpectedly short time.

These are some examples of some of the pupils recounts based on a jump they performed as Bike Baron. 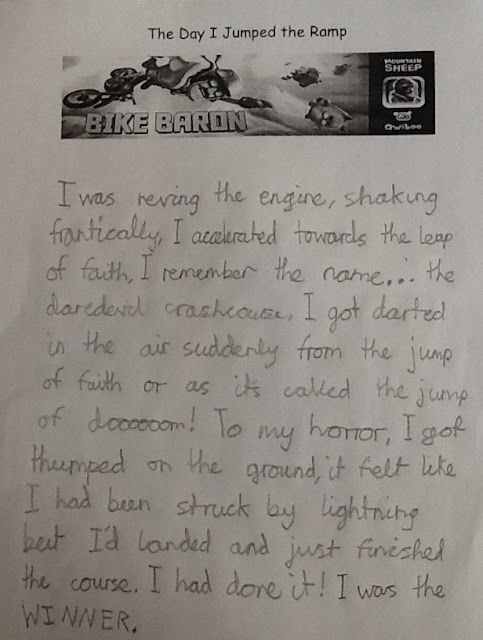 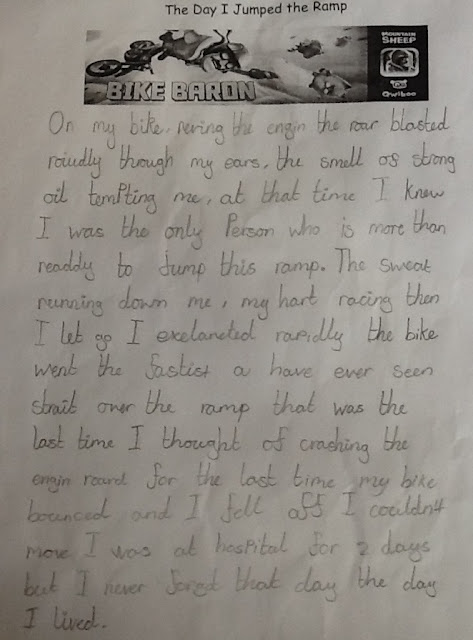 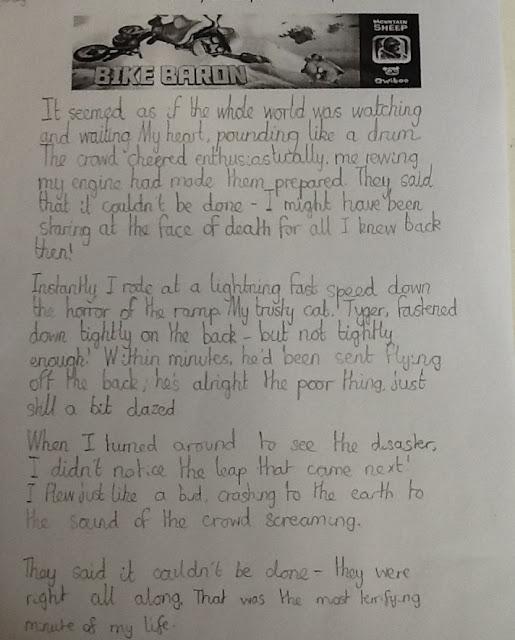 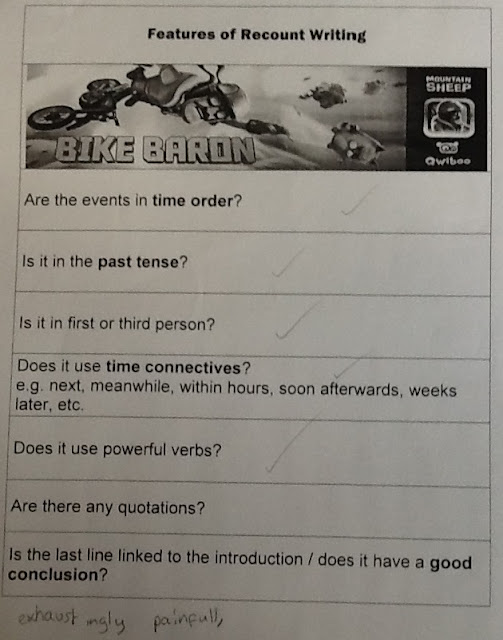 In terms of impartial assessment of the work I have sent examples to the writing moderation blogger @modblog1 and will follow with interest the online writing levelling process and compare outcomes with current teacher assessments. To observe or take part in this process follow the link: www.modblog1.blogspot.co.uk

The impact of the iPad:

The impact of the iPad in this project has been immense. The role of the iPad was to provide pupils with a strong depth of knowledge and understanding with which to base their writing on. It worked! The room was filled with fully-engaged purposeful writers who could not get their ideas and sentences on paper quickly enough. The ability to share, pass round, comment on, discuss and relive an action packed game had been provided by the iPad; this in turn impacted directly on pupil writing.

Rolland Chadic, very kindly left this video feedback on how this approach made an impact in his classroom in Canada.

Having developed and overseen this project alongside David Andrews it is clear that the iPad has significant potential in the classroom. Each of the writing types described in Part 1 could be expanded and further enhanced with other creative elements of iPad apps such as movie making, musical composition, book publishing etc. The Bike Baron project provided a whistle-stop tour through different types and purposes of writing and could be regarded by some pupils and teachers as a little intense. Expanding the variety of apps used could keep the process fresh and highly motivating. The ideas can easily be adapted to many different gaming apps such as Temple Run, Angry Birds, Harbour Master, Where’s My Water? and countless others. The timescale of the teaching process could also of course be adapted as required.

It does seem that many schools and teachers are recognising the value of the iPad in the classroom yet there is clearly a need for effective training and sharing of good practice to ensure it is used to full effect. Seeing the cross-curricular impact of the iPad in a school influenced by the vision of a forward-thinking headteacher and the outstanding David Andrews, it is crucial that as more and more schools make iPad purchases, they really have the knowledge and understanding of exactly how the iPad will enhance teaching, learning and the curriculum. 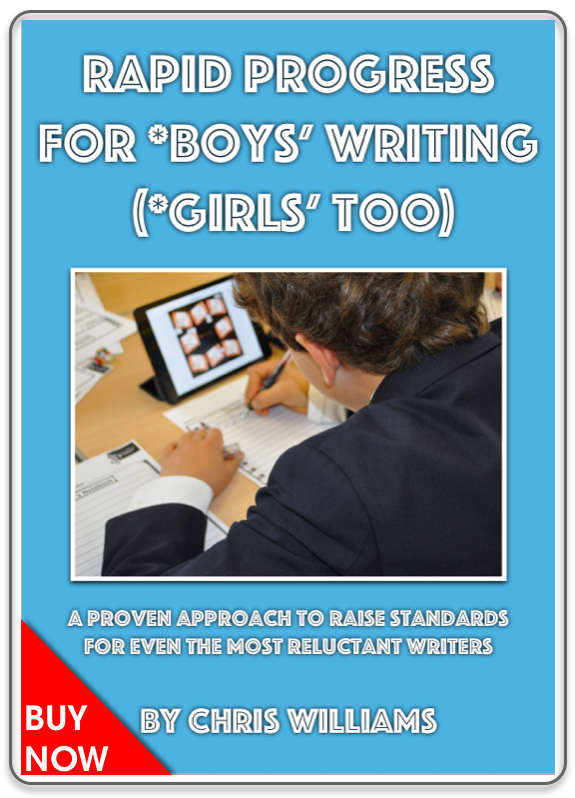