10 Practical Ways to Use Videoscribe HD in Education 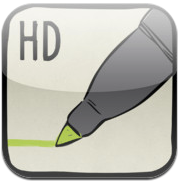 In this post I'm going to share 10 practical ways Videoscribe HD can be used by teachers and pupils in their classrooms. Videoscribe HD is one of my favourite app, so much so I've recently signed up for the Pro Version on the Mac.

Videoscribe is so simple to use, and once the animation and music are combined the finished presentation can be very empowering. It can produce real quality results in a matter of a few minutes by both children as young as Early Years right through older children and adult who can explore some of the more complex features.
Whilst the ways mentioned are not an exhaustive list of ideas or necessarily going to transform teaching and learning, they may inspire teachers and pupils to use the Videoscribe HD app on iOS devices, Mac and PC Desktop versions creatively. Pupils could demonstrate their learning and used it as a tool as part of independent work. Teachers could use it as a way to engage children in a lesson or to explain a concept.

We already have laptops, why do we need iPads?

This example was created by the digital leaders in the school. The Videoscribe explains blogging rules - dos and don'ts.

In this example Videoscribe was used to introduce the writing task 'The Day I Jumped the Ramp'. See Raising Standards in Boys Writing Using the iPad for Gaming for more detail on this blog post.

4) Explain how something works

One example of how the app could be to use in maths is as part of a maths lesson to explain the relationship between fraction, decimal and percentages. A bank of these could be created alongside Explain Everything videos and collated in Touch App Creator to build up collection of videos, which explain maths concepts and be used for independent learning in maths.

This is an example to show how Videoscribe can be used as part of a literacy lesson or topic work to present an advertisement using persuasive language and techniques.

This is short example using Videoscribe for dialogue between a pupil and a teacher debating whether children show be allowed to bring their own mobile devices in the classroom.

It could be argued that this is simple a substitution activity, however if a culture of independent learning has been established within the class, then this could be a way a pupils might chose, amongst many (pencil & paper, mind-mapping etc), to plan out a story.

This is a Videoscribe to show the alphabet and letter formation - it could be used alongside an Alphabet song, which is used by the class.

A series of these could be created as part of phonic lessons. This example is the letter 'a'.