Introducing Game Design as Part of an Integrated Project

The opportunities for learning through the use of digital gaming are diverse and massive. The speed and ease in which basic game development can be achieved using apps such as Sketch Nation can provide a platform for outstanding cross-curricular projects and really make an impact on progress, standards and pupil independence. This blog post describes one project (upper KS2) which could easily be adapted to suit Key Stage 1 or expanded to meet the needs of Key Stage 3 pupils, and to support almost any topic/subject. 1:1 use of iPods enabled maximum pupil engagement but fewer devices could have been used if pupils collaborated in groups.

The initial objective of the project was to design, produce and promote an iPod game based on an element of our current topic. In class some of the children wanted to link the game to last term’s World War 2 topic but most chose to base their game on the new topic of African wildlife and diversity. The whole outline of the project was shared with the children at the outset so they could plan and organise their work. The basic requirements were that the children would need to design and produce an original game, create a persuasive and informative marketing display on their learning wall, create online multimedia promotional material on their blog space, and to present and try to sell their game to a class of year 5 pupils at a showcase event.  This would lead to the culmination of what was ultimately a business and enterprise project. 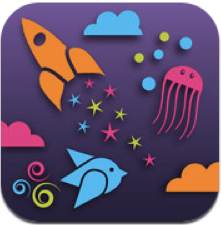 The FREE app Sketch Nation was introduced to the children. It is a quick to learn and easy to use game design app which allows users to produce their own unique digital game.  After a brief demonstration pupils were encouraged to explore the features of the app and begin to think about the game they wanted to design. There are simple and advanced levels of the app and most of the pupils chose to use the advanced level. Pupils  were able to design their own characters, a range of obstacles and enemies and platforms and backgrounds to suit the setting of their game. It is possible to create graphical content in the app, to scan in artwork or to use downloaded and edited images.  The extent of how much content be developed is vast. Scoring systems, power-ups, frequency of obstacles, effects of collisions and so many more features are all completely editable. The quality of the completed games was excellent. Some were extremely challenging, some were fun and some were a little easy. In a short space of time the children produced exactly what they wanted. Below are 3 examples of games created by the pupil's using Sketch Nation:

Linking back to previous work on persuasive writing, pupils researched different types of advertising and features of branding and promotion. They were able to create their own display on their learning wall using their own content. Every aspect of their work was also posted to their own blog space using the Posterous Spaces app.

Following research in the App Store, pupils designed their own app logos and titles. Most chose to do this by hand with felt-tips (Where do all the reds disappear to?) but some used Brushes on the iPod. Font ideas for many came from www.cooltext.com.

Posters were made in Strip Designer and Pages where the templates proved to be powerful tools in quickly creating high quality work.

Pupils swapped devices to film each other playing the games so that they could capture examples of the excitement of the game play. iMovie was used to make advertisements and this allowed easy editing and combination of images,video,captions and titles. Soundtracks were created in Garageband, the smart composition aspects of this app, along with the excellent drum machine and sampling features, make it easy to compose effective music to suit any purpose. It doesn’t take a specialist to produce high quality original compositions with Garageband.

Pupils having access to and ownership of their own blog space has been a central part to the success of many of the iPod based projects. The ability to present to and receive feedback from an audience has a powerful impact in terms of quality, pace of output, promoting independence and resilience along with a sense of pride and ownership. Every element of this project was posted to the Posterous blog quickly and effortlessly with the iPods. Posters, logos, videos, instructions, examples of gameplay and even the initial plans were explained by the pupils as part of the blog post. QR codes linked to any video content were displayed on each pupil’s own learning wall.

Presenting to an audience

As the culmination to this project (which was completed across one week in under 3 hours) the children from the adjacent classroom (year 5) were invited to a New Games Launch Event. The visiting pupils viewed the learning walls, engaged in discussions with  game designers, scanned the QR codes to view the online content and had the chance to test the games. Each visitor had 5 game tokens and was able to “purchase” their favourite games. This session was focused, very interactive and proved to be an exceptional opportunity for promoting speaking and listening, questioning and answering. It also provided valuable feedback to the pupils on the quality of their game designs and promotional material.

Although each pupil’s starting point was a history or geography objective such as “Demonstrate an understanding of the main threats to wildlife in Africa” or “Recognise the implications on the Battle of Britain in WW2” the opportunities that to expand learning in a project like this are numerous. There were many opportunities for writing in terms of persuasive texts, summarising feedback and reporting on the New Games Launch Event. During the event records of scores were kept for each player of the game allowing investigations into averages and data handling opportunities. There was a significant impact of the pupil’s ability to orally present and explain their work using appropriate styles and vocabulary. The integrated of the iPods has allowed them to become a tool to support and enhance learning. The pupils only use it when it is needed and will often choose other methods of presentation and research.